So. 2017. I for one am pretty pleased to get rid of 2016. It was (to say the least) quite possibly the most unpleasant ever year for a number of my pals, so the commencement of a New Year is particularly appreciated here. I’ve no doubt that 2017 will be challenging, but I am hoping it won’t also be terrible.

I’ve never been one for resolutions, never wishing to set myself up to fail; but this year I thought I might give myself a motto. Working for myself, from home, with no real external pressure is delightfully luxuriant, but I do often feel as though I’m lacking focus.

I already use the ‘three reasons’ method to ensure I don’t buy too much stuff (ie three reasons why I need the item, other than ‘ooo, me likey’) and if I cared more about my appearance, I’d probably apply it to my diet and exercise regime (those who know me will be laughing at the words exercise and regime).When I was first released from the 9-5, I started a mini journal, having been advised by everyone immediately after their retirement that their days just blurred into one long nothingness.

I used that diary to note what I did each day, but only noted down tasks. I didn’t note anything that I considered indulgent; like reading a book, or taking a walk, sitting in the garden, playing PlayStation – you know; holiday type things!

I stopped recording things when I got to the end of 2014, having felt that I no longer needed it. 2015 was just busy, busy, busy; cracking on with the jewellery, getting to grips with using Etsy for sales and of course, that’s when I got a KOBO and I discovered Twitter and WordPress.

2016 was far less focused, in no small part due to the challenges I mentioned earlier, but mostly because I think I became a little complacent in my freedom. (I can’t imagine the hours surfing the net helped either!) It left me feeling as though I had wasted much of my time. I don’t need or want to always be busy, but I do want to end each week – ideally each day- feeling that it was a day well lived. To this end I’ve chosen ‘make it count’ as a motto for the year.

I might even make myself a piece of jewellery to wear all the time, prompting me.

My first Make It Count of the year, is to nail Keum-Boo.

I’ve had a productive week so far; spending Monday prepping estimates and prototypes for potential commissions (work) revisiting the address book (personal) and fighting for hours with the wifi extender for the router (both, nearly culminating in a small meltdown!)

Yesterday was more jobs in the morning, and a lovely visit from a pal for lunch, with more wifi-war in the afternoon 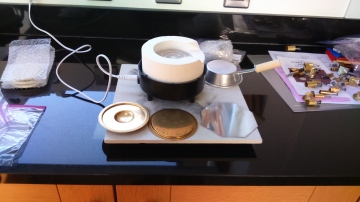 Today I appear to have fixed the wifi, tidied up all the ebook reviews I’ve been meaning to do and I completed my first batch of Keum-Boo on the new Ultralite Kiln I showed you in the autumn.

I’m very happy. Have learned lots, haven’t scorched my eyebrows orf and I really made the days count this week. YAY ME!

Picture is of a rubbish Twelfth Night cake I made after realising that I’ve been spending 20 years rushing to complete a Christmas cake for the 25, when of course, it’s far more traditional to have one for twelfth night . The sweets all came in the post as a surprise Christmas gift from my pal in Sweden.

It’s not very well made, but I don’t care. I had fun, it made MrG and I larff and that’s all that mattered. Happy 2017 chaps. Next post will be my adventures in Keum-Boo.

Finally able to make stuff and get paid for it!!! How cool is this?!
View all posts by DawnGillDesigns →
This entry was posted in Baking, DGDCheeryUppy, Stuff I love, UltraLite, Uncategorized and tagged books, life, MakeITCount, Motto, New Year. Bookmark the permalink.

11 Responses to Make it count…

This site uses Akismet to reduce spam. Learn how your comment data is processed.